How Are you Feeling Today Baby Bear? 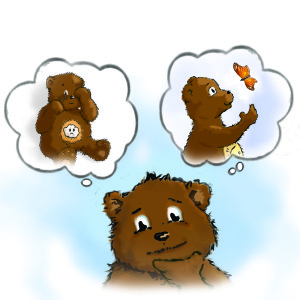 Baby Bear was initially borne out of a sense of frustration rather than any creative urge to write my first children’s book! I was working for a domestic abuse organisation at the time supporting parenting and children impacted by living with domestic abuse and violence. I always took a range of books with me to my sessions in the refuges or in schools and pre-schools and sometimes lent them out to parents. For example, Huge Bag of Worries and A Terrible Thing Happened were 2 of my favourites but what I really wanted was a story book that actually matched some of what the children might have seen and sensed so that they could begin to have opportunities to think and talk about it if they needed and wanted too. The only one I managed to find had some very old fashioned photographic pictures of domestic abuse and was an embarrassingly basic tool, not a Bear or Bunny in sight and not suited for little ones at all.

In my domestic abuse work with older children I had become particularly concerned as they seemed to have a really limited ability to explain or understand any of their feelings. Talking with a parent one day she told me whenever her son had any ‘big’ feelings, positive or negative, he hit out as he didn’t know the difference. I found the children I did 1:1 work would struggle to give examples of words beyond angry, happy, excited, worried. It made sense as I realised that any parent living in an abusive relationship would find it difficult to have those day in day out back and forth conversations with their child about how they were feeling as it may not have been safe to do so.

For several months I had a story about a little bear running around in my head. I was determined that whatever I produced would not directly mention domestic violence and should be a beautiful book with a lovely central character the children could warm too, that’s how Baby Bear was ‘borne’. Ironically it was my post as a Domestic Abuse Parenting Worker coming to an end through lack of funding that meant my story finally got turned into a book as for once I had time on my hands!

My next priority was to ensure that there would be a guide so that parents, carers and professionals could feel more comfortable directly addressing such a complex issue as living in an abusive home with young children in a gentle way. I knew many wanted too but did not know where to start so that was an added incentive to get Baby Bear into print with some guidance about how to gently ‘suggest’ feelings and how to know when to hold back at certain key points in the book so the child gets to say how it was for them rather than assumptions being made. This felt especially important as I had been told by an older child that if he told anyone about growing up with domestic violence, that “people think they know what it’s like but they don’t”.

Since, How are you feeling today Baby Bear? was published by Jessica Kingsley in February 2014, I have been working on an ‘adolescent to parent abuse’ project as their Relationship worker with the young people and their parents. It turns out all of these young people’ were Baby Bear’. They have grown into sad, stressed, confused Big Bears and life is not going well for them, or their families. They struggle to name or understand what they or others are feeling and tell me they would have loved a book like Baby Bear.

Everywhere I go I get fantastic feedback about the innovative ways in which Baby Bear is being used, mostly with children post domestic violence but also to encourage children to explore names for feelings and to disclose child sexual abuse. At a conference in November a Children’s Centre Worker gave several examples of how children had used the book and a range of bears to role play difficult things they have seen and lived through, it was very moving.

I am delighted Baby Bear is out in the big wide world and often encourage anyone and everyone on Twitter to #donateBabyBear to a refuge, school, pre-school, hospital or anywhere that children are likely to be. Children are very vulnerable post domestic abuse; they really need to be able to work out how things and other people make them feels and to be able to put it into words. Who knows, finding ways of making some sense of the terrible things they have seen and heard seems something every child should have a right to have help with and hopefully that’s what Baby Bear will keep on doing far and wide until domestic abuse is no longer an issue in the World.